Spot power prices moved down on Friday as a rise in temperatures over the weekend was expected to weigh on demand levels. Prices could fall further this afternoon as the mild weather is set to continue and the coal market remains weak. Gas prices have fallen on the back of the warmer weather and an expected LNG delivery, with prompt contracts displaying larger losses than those on the far-curve. Prices are expected to decrease further this afternoon as fundamentals are unchanged from Friday. Today's prices can also be found in an easy to read table on our 'current UK energy price' page.

The gas curve displayed numerous losses on Friday with Day-Ahead shedding 0.60ppt from its price and May-14 decreasing by 0.10ppt on the back of a milder weather forecast. The improved weather was the main market driver as a short UK gas system was ignored, while three LNG deliveries have also been scheduled for arrival. Power contracts followed their gas counterparts with the majority of contracts ending the session lower. Day-Ahead fell by £0.30/MWh due to the drop in demand as a result of warmer temperatures in the UK. Summer-14 recorded a £0.10/MWh loss while other seasonal contracts displayed price-drops following a decrease in carbon prices.

Gas prices made further losses this morning, Day-Ahead fell by 1.00ppt and Front-Month moved 1.40ppt lower in its last day of trading. A number of contracts displayed losses in excess of 1ppt while seasonal contracts also moved down. Day-Ahead power failed to take any direction from gas and added £1.55/MWh to its price as wind generation is expected to plummet tomorrow. Further along the curve contracts displayed losses by as much as £1.25/MWh with influence coming from a weaker carbon market.

Market close data has revealed that the 1-year forward price for both commercial gas & commercial electricity decreased - closing at 57.48ppt and £46.46/MWh, respectively. This can be seen in the graph below. 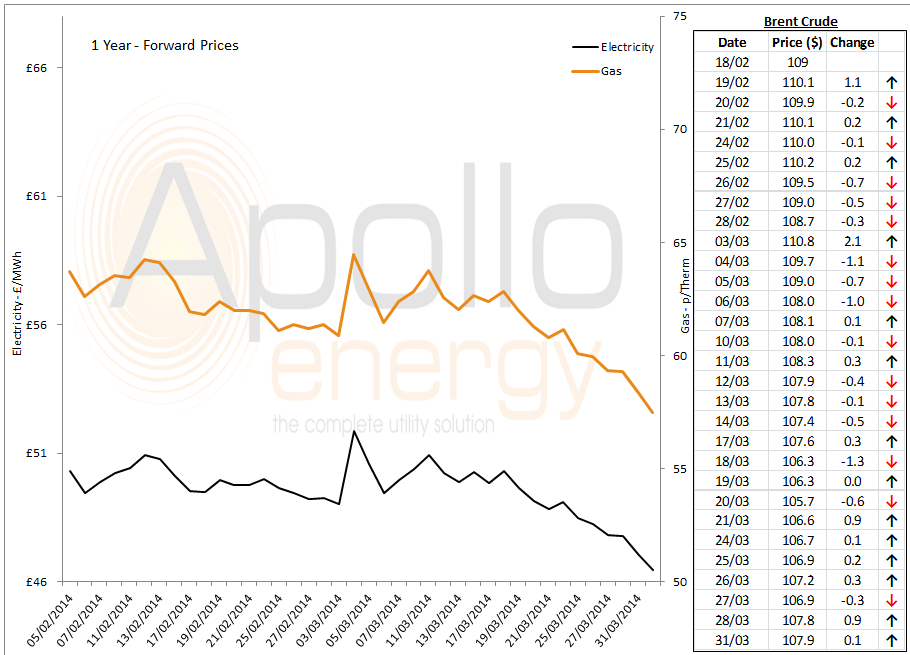 Brent 1st-nearby prices moved higher on Friday and closed at a $0.24/b premium; prices gained $1.15/b over the course of last week. Meanwhile, WTI increased by $0.39/b which has taken the Brent/ WTI spread to -$7/b.