Spot power prices are currently dictated by low wind generation which isn't expected to improve until tomorrow. However, relative calmness in terms of the Ukrainian crisis should see prices fall today as the market attempts to correct itself. Gas prices weakened yesterday on the back of a healthy UK system and lower demand which is currently 12% below the seasonal average. Temperatures should maintain their current levels until the weekend which should see contracts record further losses this afternoon. Today's prices can also be found in an easy to read table on our 'current UK energy price' page.

Gas contracts initially opened the session higher but decreased throughout the day to close at a discount. Day-ahead shed 0.55ppt from its price, while seasonal contracts fell by as much as 1.30ppt despite a tight gas system. Day-Ahead power showed little change yesterday and moved just £0.05/MWh, while the rest of the curve followed gas with Winter-14 decreasing by £0.80/MWh. A temporary drop in French interconnector output failed to provide any support to prompt contracts.

Gas prices weakened further this morning with contracts losing 1ppt on average across the curve. The UK gas system was close to balance despite overall gas flows being reduced by 15mcm, following a drop in Dutch imports. Temperatures are forecast to be slightly cooler over the weekend but this did little to affect prompt prices as warmer weather is expected next week. Power contracts took a similar direction to gas with most contracts displaying large losses. Day-Ahead opened £0.65/MWh lower as wind generation is predicted to ramp up tomorrow which should offset a drop in nuclear production.

Market close data has revealed that the 1-year forward price for both commercial gas & commercial electricity decreased - closing at 60.40ppt and £51.05/MWh,respectively. This can be seen in the graph below. 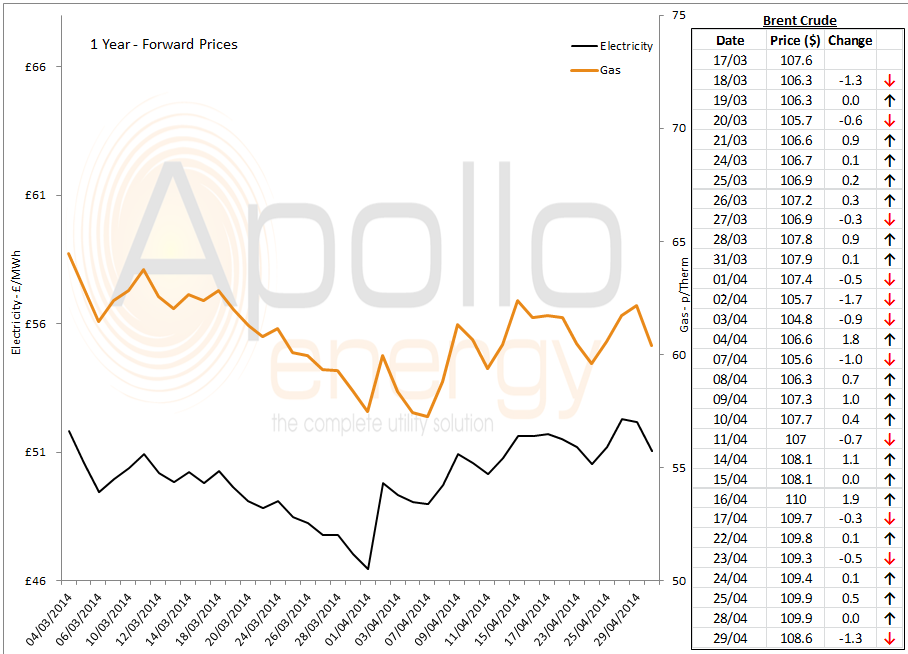