Spot power prices moved down yesterday with bearish pressure coming from weaker gas and healthier nuclear availability. Near-curve prices could record further losses this afternoon as hydro production is improved and oil prices could be pressured down. Gas prices decreased on the back of rising Norwegian flows and ample LNG supplies, with the levels expected to improve further today. UK temperatures are expected to remain below average until next week with demand levels forecast to be 10% above the seasonal norm for the next few days. However, Norwegian imports into the UK continue to rise and this has led to a stable-to-bearish outlook for today. Today's prices can also be found in an easy to read table on our 'current UK energy price' page.

The gas curve displayed numerous price-drops yesterday despite stronger demand levels as a consequence of cooler weather. Instead, the curve took direction from an improving supply picture with maintenance at the Troll gas field expected to be concluded today. Power prices also displayed losses and followed the movement of gas, although the decreases were less prominent. Weaker renewable generation helped to restrict some downward movement, as did a strong demand forecast.

Gas prices are generally stable this morning with a stronger supply picture being offset by below average temperatures. This current cold stint is expected to last until next week, resulting in increased heating demand. Power prices display a similar trend to gas with a healthier generation picture making up for stronger consumption levels. A slight increase in fuel prices has offered some support to the far-curve, while continued cold weather has helped the prompt contract to open at a premium.

Market close data has revealed that the 1-year forward price for both commercial gas & commercial electricity showed no change - closing at 46.48ppt and £44.50/MWh, respectively. This can be seen in the graph below. 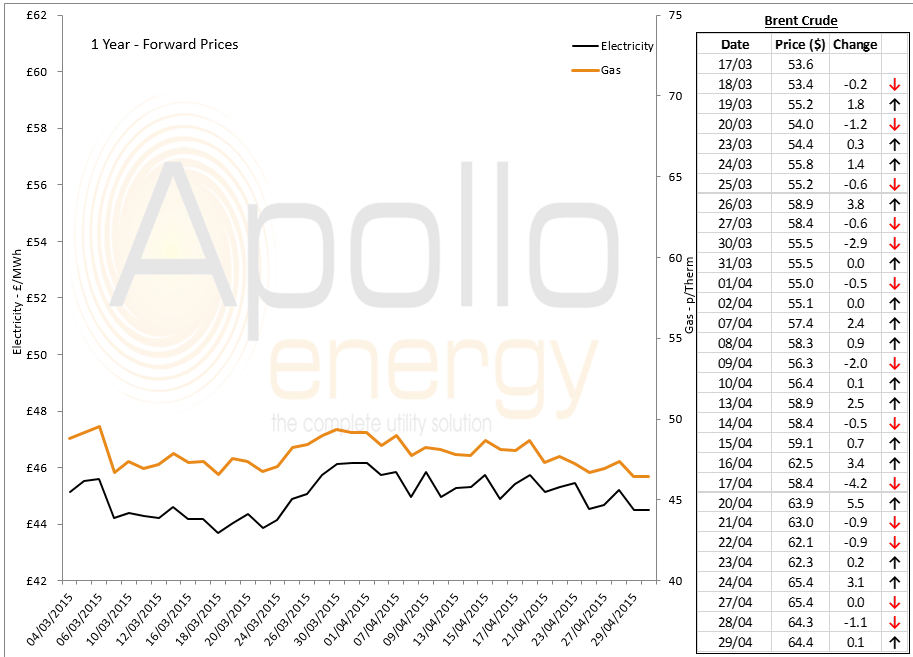