Spot prices went up slightly due to limited supply as a result of reduced renewable energy output and maintenance at a number of power plants was also a contributing factor. Calendar-2014 baseload prices also made gains helped by strengthening gas and clean coal costs.

Day-Ahead gas went up by 1.15ppt and Front-Season saw a rise of 0.45ppt as gas contracts went up across the curve. The gains made by Brent on the back of US economic data was one of the main influences in today's bullish direction. Linepack closed the session short after spending most of the session on the long side and LNG flows were over 40mcm. The new front month July-13 made a loss of £0.35 in its first day of trading and Day-Ahead went up by £0.25/MWh. On the Far-Curve seasonal contracts saw little movement with Winter-14 and Summer-15 closing unchanged. A nuclear reactor in Scotland was switched offline last week because of high seaweed levels which could have damaged the facility's system but is now back online as of yesterday.

A number of gas contracts saw no change this morning as there was little affecting the market at the opening of the session, Day-Ahead climbed 0.10ppt and the front three months saw no movement. Seasonal contracts mixed changes as the Far-Curve ignored the gains made by Brent. Norwegian flows dropped by around 50% today and Langeled flows were at 9mcm. Day-Ahead went up by £0.50/MWh at the opening of the session as power contracts experienced mixed movement across the curve. Wind generation decreased by 30GW and cut its share of the generation mix by half to 4%.

Market close data has revealed that the 1-year forward price for commercial gas rose while commercial electricity made a slight loss - closing at 68.08ppt and £51.93/MWh, respectively. This can be seen in the graph below. 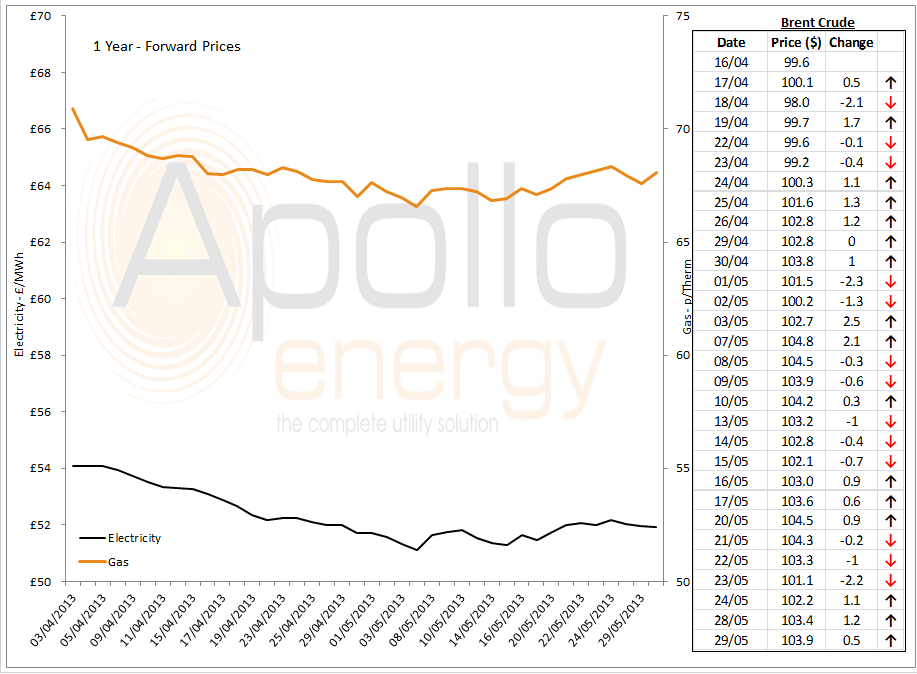 Brent 1st nearby prices made further gains as a result of various political events in oil producing countries and tensions on the European equity markets. Positive economic data from the US which strengthened the USD managed to restrict the gains somewhat.