Spot power prices fell on the back of low demand yesterday morning, although several outages at power plants shortened supply. However, political tensions in Eastern Europe and the Middle East continue to worry traders and gains were recorded yesterday afternoon and early this morning, further upward movement cannot be ruled out. Gas prices climbed higher yesterday as Linepack was short for most of the day and consumption rose slightly. There has been little change to fundamentals this morning and Russian supply remains a concern; additional gains are expected this afternoon. Today's prices can also be found in an easy to read table on our 'current UK energy price' page.

Gas prices recorded significant gains yesterday afternoon as Day-Ahead rose by over 3.00ppt to close at around 42ppt. A long UK gas system and news of further LNG deliveries failed to influence contracts which instead took direction from geo-political tensions. Day-Ahead power moved just £0.15/MWh higher yesterday as the rest of the curve displayed large gains. Front-Month rose by £1.50/MWh, while October-14 increased by £1.70/MWh as contracts followed their gas counterparts.

Near-curve gas contracts were generally unchanged this morning as Day-Ahead opened flat and Front-Month moved just 0.20ppt higher. Elsewhere, September-14 and Q4-14 added 1.00ppt and 0.74ppt to their price, respectively. In terms of supply, LNG flows increased by 29% although there was a drop in Norwegian and Bacton BBL output. Prompt power prices displayed larger gains than the ones seen by gas as Day-Ahead rallied £1.00/MWh higher. Wind generation levels are expected to improve tomorrow and should maintain reasonable levels for the rest of the week which could provide some bearish pressure.

Market close data has revealed that the 1-year forward price for both commercial gas & commercial electricity increased - closing at 59.07ppt and £50.63/MWh,respectively. This can be seen in the graph below. 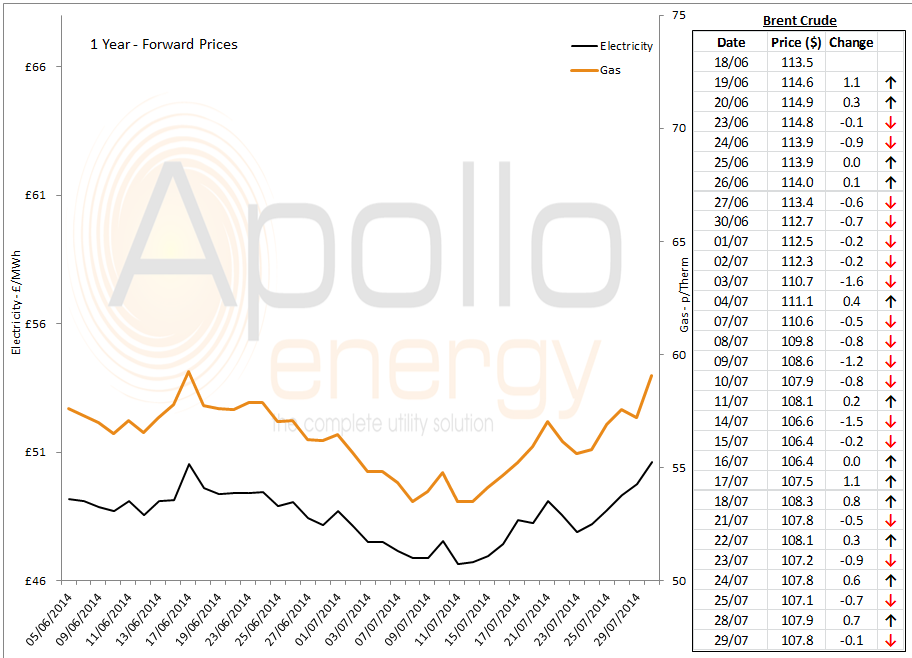 Brent 1st-nearby prices fell by $0.82/b this morning and currently trade at $107.5/b, while WTI remains just under $101.5/b. The on-going situations in Ukraine, Libya and Iraq are still rather unpredictable but healthy supply levels have resulted in bearish movement at the beginning of this week.