Spot power prices displayed little movement yesterday as below average temperatures have pushed demand levels higher, while an improved renewable generation forecast provided some downward pressure. Gas demand increased yesterday as temperatures were around 4 °C below the seasonal norm across Europe and prices moved higher as a result. Demand levels are expected to climb even higher tomorrow but an over-supplied UK gas system has helped gas contracts stabilise today. Today's prices can also be found in an easy to read table on our 'current UK energy price' page.

Prices lifted on the gas curve yesterday as strong demand levels continued due to below average temperatures, while maintenance also began at a gas field in the North Sea. Consumption levels were 41mcm above the seasonal norm which resulted in undersupply, with further tightness coming from the 8.5mcm drop in North Sea output. However, there was some bearish movement further along the curve due to another significant drop in oil prices. Front-month contracts increased yesterday with direction coming from stronger gas; August-15 recorded a gain of £0.25/MWh. Weaker Brent pressured down contracts further along the curve, with assistance also coming from a drop in coal prices.

Gas prices are generally bullish on the near-curve this morning but overall movement is minimal. Demand levels are expected to rise tomorrow which has helped to support the prompt which added $0.60/b to its price. Meanwhile, maintenance at the Britannia North Sea gas field is expected to last until the 18th of August and output will be restricted until then. Movement on the power curve is subdued this morning as improved renewable generation has offset the effects of above average consumption. A slight rebound in oil prices and reduced North Sea gas output has helped to support some far-curve contracts but the gains are minor.

Market close data has revealed that the 1-year forward price for both commercial gas & commercial electricity decreased slightly - closing at 43.98ppt and £43.35/MWh, respectively. This can be seen in the graph below. 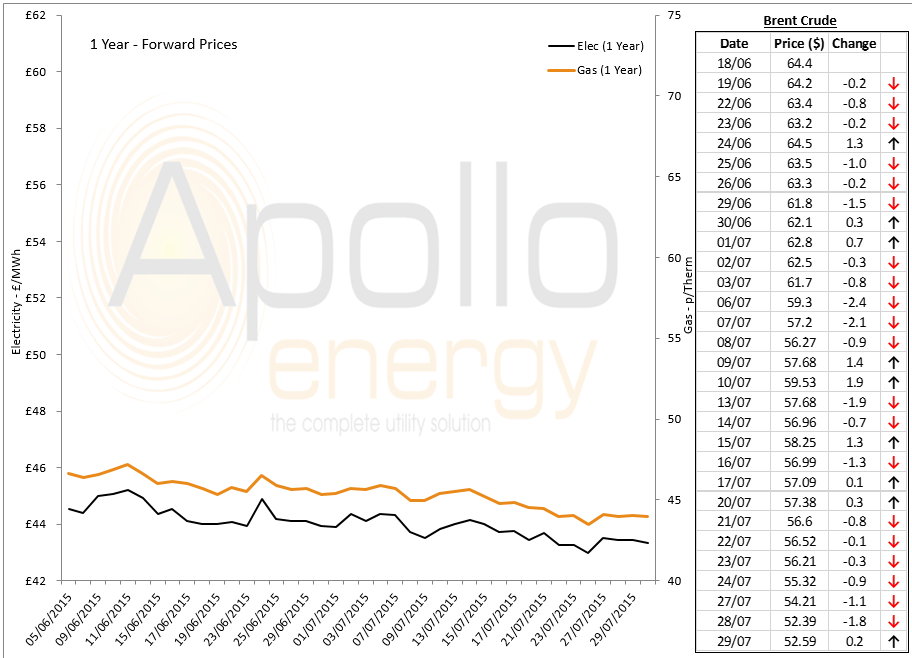 Brent 1st-nearby prices dropped to $52.28/b yesterday but have displayed a small increase of $0.30/b this morning on the back of a weaker US Dollar.