Spot power prices strengthened yesterday due to an expected drop in wind and solar production combined with outages at coal-fired plants. The supply picture is relatively unchanged today and rising Brent and coal prices should lead to further gains. Gas prices also moved higher on Tuesday as the UK gas system was short throughout the session following outages at a number of pipelines. Gas demand has increased today due to colder temperatures and weak production has left the UK gas system 40mcm short; bullish movement is expected as a result. Today's prices can also be found in an easy to read table on our 'current UK energy price' page.

The gas curve displayed numerous gains yesterday due to a colder weather forecast for today and a significant drop in overall gas flows. However, further along the curve the gains were less noticeable as milder temperatures are expected to return. Day-Ahead power recorded large gains yesterday on the back of weak wind production and an expected rise in demand for today. Oil prices recorded a rare gain yesterday which provided additional support to far-curve contracts.

The gas curve moved higher as a result of a short UK gas system, initially opening 38mcm short but later moved towards 27mcm. An unplanned outage at the Karsto gas field in Norway restricted output into the UK, while BBL flows have fallen to 0mcm. Further bullish support was provided by strengthening oil and coal. Wind generation is still weak compared to Monday's levels but is set to improve to around 2.9GW tomorrow, helping Day-Ahead power to weaken. Monthly and quarterly contracts for 2015 also decreased as winter demand is forecast to be below average in the UK. Elsewhere, seasonal contracts followed their gas counterparts and displayed gains between £0.10/MWh and £0.25/MWh.

Market close data has revealed that the 1-year forward price for both commercial gas & commercial electricity climbed increased - closing at 56.58ppt and £50.75/MWh, respectively. This can be seen in the graph below. 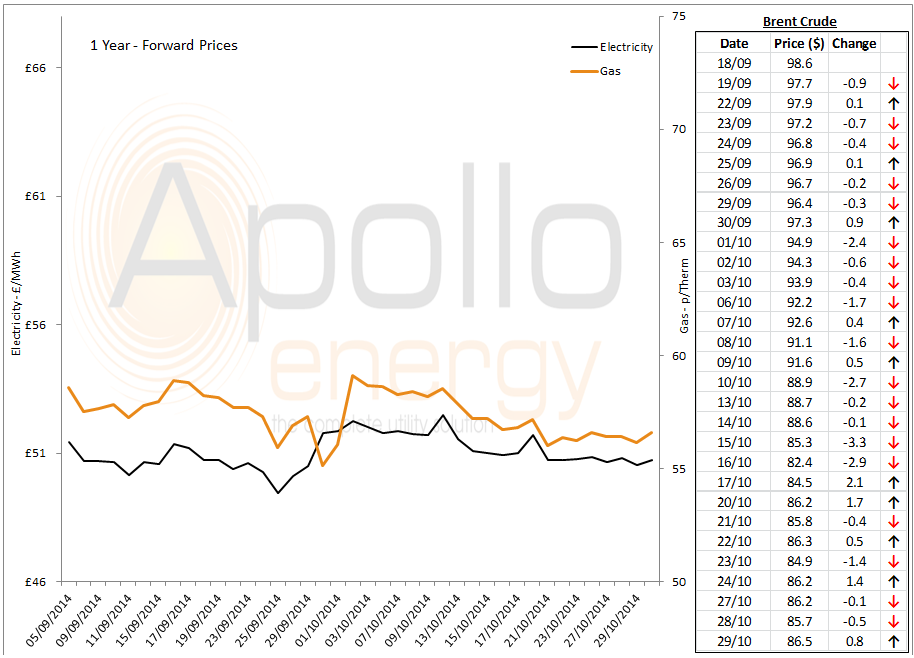 Brent 1st-nearby prices recorded a $0.20/b gain by the end of yesterday's session but have continued to climb higher this morning and now trade above $86.5/b.