Demand levels in the UK rose significantly at the start of the week and were the highest point in 10 months. Thursday saw an uptick in temperatures which helped to reduce demand levels and temperatures remained above the seasonal average this morning. However, colder weather is set to creep in next week and this should have a significant impact on consumption levels. Wind generation levels remained low throughout the working week and expensive gas-fired generation was required to make up the difference, which was also the case last week. Nuclear generation was 1.1GW higher than last week's levels on average whereas coal-fired generation was up by over 2GW to meet the increase in demand. The rise in consumption levels led to a noticeable increase in the Day-Ahead price for power which had an average opening price of £51.28/MWh this week compared to £48.95/MWh last week. 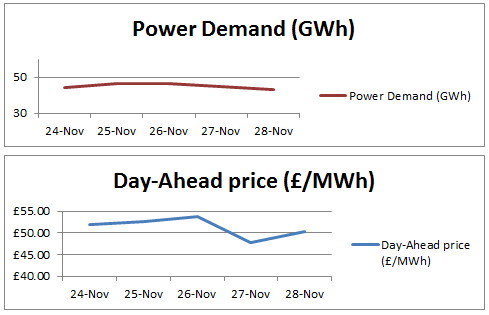