Spot power prices continued to display a bearish trend yesterday and with a higher wind production forecast and milder weather expected prices could fall further. Gas prices moved down on the back of milder temperatures and healthy fundamentals, the market is also currently oversold but a rebound in prices is not expected just yet; prices are expected to record further losses today. Today's prices can also be found in an easy to read table on our 'current UK energy price' page.

Losses were seen on the gas curve yesterday with Day-Ahead shedding 0.35ppt from its price and February-14 closing at a 0.55ppt discount, some seasonal contracts also recorded a loss of almost 0.45ppt. Linepack was 7mcm short earlier in the day but an increase in flows via the Rough facility helped the system become balanced. Day-Ahead power climbed £4.00/MWh higher as a significant drop in wind production was expected for today, while numerous coal-fired plants suffered reduced output. Further along the curve a few seasonal contracts made losses with Summer-15 moving £0.25/MWh lower following the government decision to impose a hold on carbon tax.

The start of today's session saw gas prices decrease further as temperatures are expected to be above average for the first half of February. Contracts ignored the effects of rising Brent and a slight reduction in Langeled and Bacton BBL flows. On the power curve, Day-Ahead recorded a £6.50/MWh loss as wind generation is forecast to double tomorrow. The majority of contracts displayed losses which ranged from £0.15/MWh for Q3-14 to £0.50/MWh for March-14 as prices took influence from gas.

Market close data has revealed that the 1-year forward price for both commercial gas & commercial electricity decreased - closing at 64.23ppt and £50.43/MWh, respectively. This can be seen in the graph below. 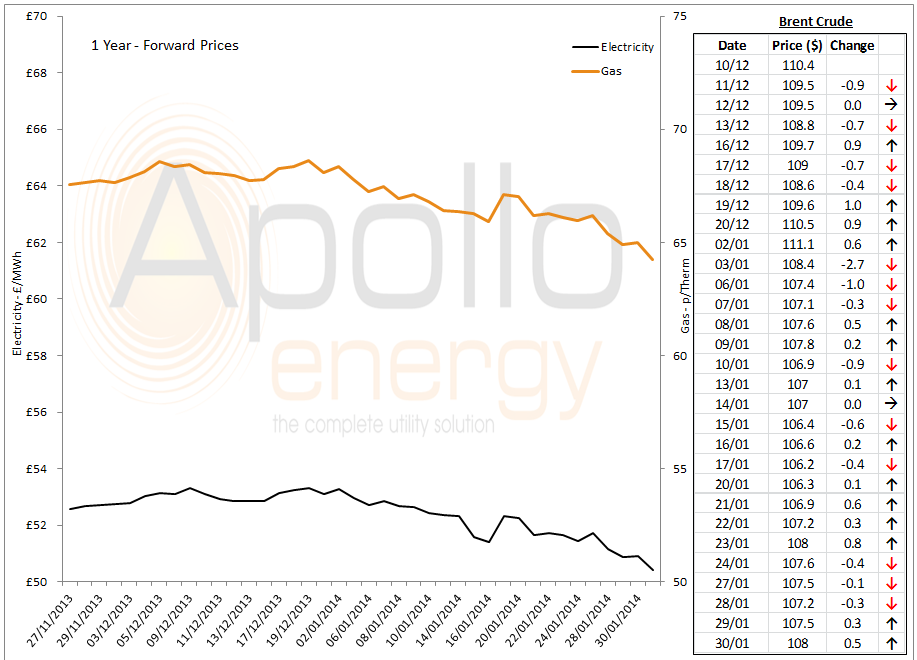 Brent 1st-nearby prices fluctuated yesterday but eventually ended the session $0.44/b higher. WTI showed little change as the bears were kept at bay by the winter weather which has led to an increase in heating oil demand.