Spot power prices moved slightly higher yesterday as three large coal-fired power plants in Germany and Holland were taken offline. The absence of these three facilities had a significant effect on European supply, with further pressure coming from strong demand levels due to below average weather. Gas prices decreased yesterday afternoon as an unexpected outage at the Rough storage facility reduced storage injections, resulting in lower demand and an oversupplied system. The UK gas system remains long this morning as UKCS production has increased, while a second LNG delivery is also expected to arrive at South Hook in the next few days which has resulted in a stable-bearish outlook for prices. Today's prices can also be found in an easy to read table on our 'current UK energy price' page.

Near-curve gas prices decreased yesterday as an unplanned outage at the Rough facility, the UK's largest storage site restricted injections to 18mcm a day, with no return date set as of yet. This saw demand levels fall to 171mcm, 21mcm lower than Tuesday, although colder weather kept levels above average. Power contracts followed the movement of gas yesterday afternoon and posted small losses. Solar generation is expected to rise by almost 1GW today to 3.6GW which helped to weigh on the prompt contract, although weaker wind generation provided resistance. Further out, Winter-15 decreased by £0.15/MWh to end the session at £45.15/MWh.

Downward movement is visible across the gas curve this morning as the UK system remains over-suppled following the restriction in storage withdrawals. Below average temperatures continue to contribute to strong demand levels but an expected LNG delivery has helped to weigh on prices further. Power prices are generally bearish today with direction coming from weaker gas and the return of the 615MW unit 7 Heysham 2 nuclear plant this afternoon. However, movement on the far-curve was less prominent due strengthening oil prices.

Market close data has revealed that the 1-year forward price for both commercial gas & commercial electricity decreased slightly - closing at 43.88ppt and £43.23/MWh, respectively. This can be seen in the graph below. 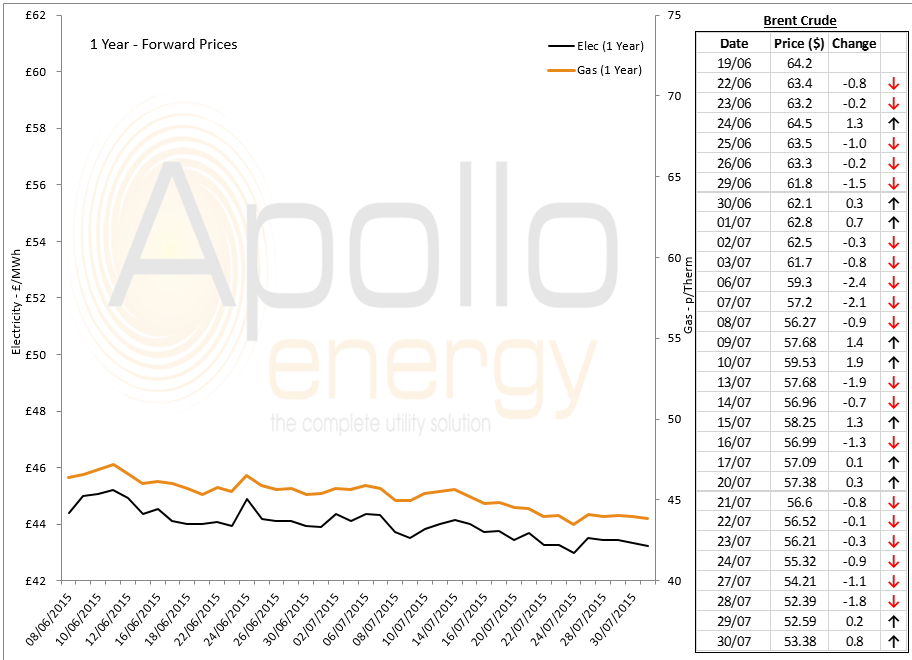 Brent 1st-nearby prices have increased overnight, adding to yesterday's gains to trade at around $52.80/b; falling US crude oil stocks were the main supportive factor.