Spot power prices are currently influenced by low wind and solar generation which has helped the majority of contracts move higher. Today's outlook focuses on a colder weather forecast with winter approaching but weaker carbon will provide some bearish pressure. Gas prices ended yesterday's session higher after initially opening at a discount as an agreement is yet to be reached in regards to Russian supply. UK gas demand is around the seasonal norm and overall gas supply has improved which should lead to a stable market this afternoon. Today's prices can also be found in an easy to read table on our 'current UK energy price' page.

Gas prices displayed a rebound yesterday afternoon after a series of significant losses at the session's opening. Day-Ahead closed at 50.05ppt as the UK gas system was 7mcm short, while October-14 climbed 1.40ppt higher on its last day of trading. Renewable generation in Europe remained low for this time of year and provided support to near-curve power contracts, with the majority of prices closing higher. Improved nuclear availability restricted the gains somewhat but rising demand helped the bulls take control.

Most gas contracts displayed a loss this morning as a healthy supply picture offset an increased demand forecast. Some contracts on the far-curve were influenced by the expected colder weather, while Day-Ahead added 0.25ppt on the near-curve due to a short system. Day-Ahead power fell by £0.25/MWh as UK wind generation is set to improve this week. The rest of the curve displayed mixed movement with the new Front-Month contract, November-14 increasing by £0.60/MWh.

Market close data has revealed that the 1-year forward price for both commercial gas & commercial electricity climbed higher - closing at 56.05ppt and £51.88/MWh, respectively. This can be seen in the graph below. 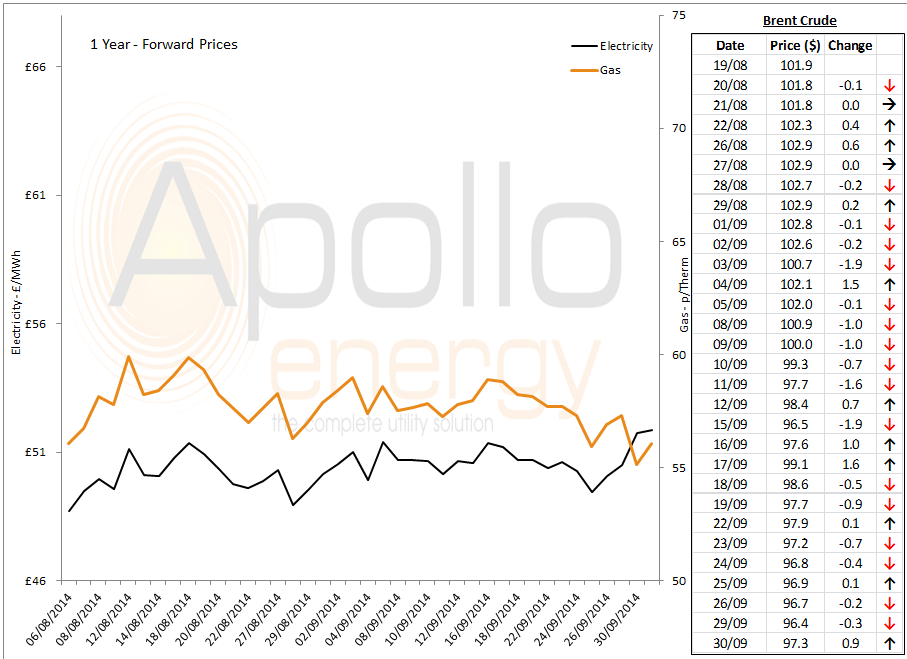 Brent 1st-nearby prices have fallen for the third month in a row despite a slight rebound yesterday. Brent currently trades just above $97/b this morning, while WTI stands at $94.5/b.