Spot power prices showed little movement yesterday with some near-curve prices recording small gains as fundamentals were generally unchanged. Prices are bearish today due to the usual drop in demand on Fridays and an expected rise in wind generation over the weekend. Talks are on-going regarding Russian supply into Europe and this helped to push the majority of gas contracts higher yesterday. Today, improving Norwegian flows and mild temperatures should weigh on prices and result in numerous losses this afternoon. Today's prices can also be found in an easy to read table on our 'current UK energy price' page.

On the gas curve support to the Day-Ahead contract was provided by numerous outages at power plants. Further along the curve the majority of contracts moved higher with rising Brent and the restart of Ukrainian talks a factor. Day-Ahead power decreased by £1.25/MWh yesterday as milder weather, resulting in weaker demand outweighed the effect of low wind production. Further along the curve most contracts followed their gas counterparts and stronger fuel prices.

Day-Ahead gas fell by 1.10ppt this morning as overall gas flows increased by 23mcm from yesterday's levels. Bacton BBL flows stood at 0mcm but output has risen to 14mcm today, despite this, the UK gas system opened 5mcm short. Weaker supply levels led to bullish movement on the power curve this morning while a fresh set of talks regarding Ukraine/ Russia also provided support. Stronger carbon prices also resulted in numerous gains on the far-curve. Day-Ahead recorded a sizeable drop this morning of more than £8/MWh as demand is set to drop and wind production is on the rise.

Market close data has revealed that the 1-year forward price for both commercial gas & commercial electricity decreased - closing at 56.45ppt and £50.73/MWh, respectively. This can be seen in the graph below. 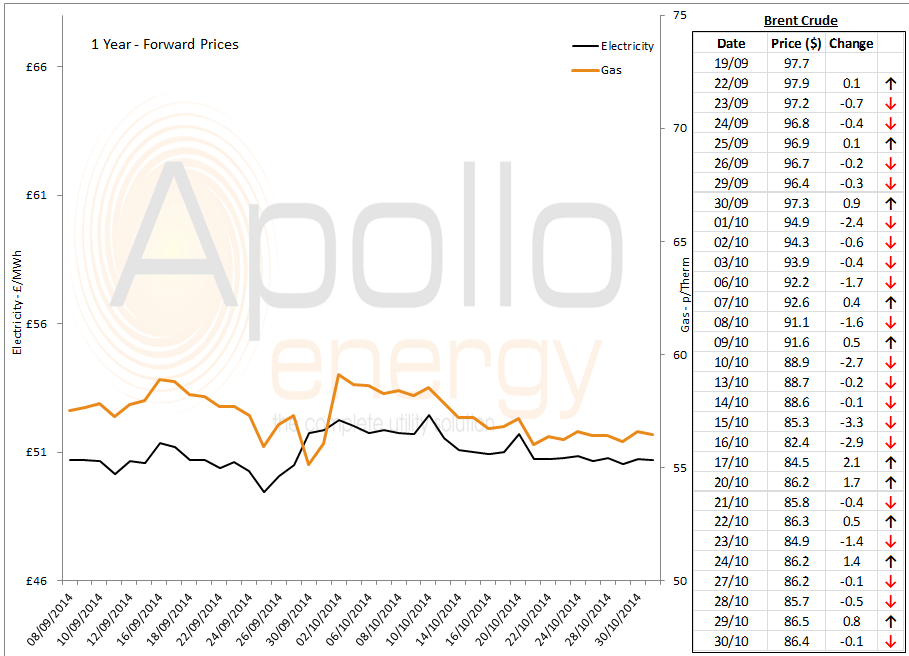 Brent 1st-nearby prices climbed higher yesterday and is on course to record a weekly gain. Oil prices were supported by the recently released EIA stocks report which shows that US crude stockpiles failed to increase significantly last week.