Spot Prices saw a slight fall this morning as wind and nuclear generation was at similar levels to yesterday. The market is set to look bearish as the week goes on due to the warm weather forecast.

Day-Ahead gas fell by 0.50ppt and May-13 saw a loss of 0.40ppt as the gas contracts took a bearish turn. A long system and news that maintenance on a Norwegian platform has been pushed back to the middle of May has helped prices make losses. Seasonal contracts also decreased in price as a result of a $1.50/bbl drop in Brent prices. The power curve followed a similar trend to gas due to lower demand, a fall in carbon prices and improved temperatures. Day-Ahead made a £0.45/MWh loss and closed at £48.45/MWh and June-13 saw a £0.15/MWh discount at closing. Carbon prices made a â‚¬0.20/tn drop at the end of yesterday's session.

The first trading day of May saw Day-Ahead make a 0.35ppt gain as gas contract prices went up slightly. Norwegian and LNG flows were lower this morning as South Hook saw yet another decrease, Linepack also opened at 24mcm short. Seasonal contracts were unaffected by the losses made by Brent which fell by around $2/bbl. The Power curve also made gains with Day-Ahead going up by £0.40/MWh; Aug-13 was one of the few contracts to make a loss as it made a small drop of £0.10/MWh. Wind generation dropped to 17GWh and made up 5% of the generation mix despite forecasts predicting it to be higher. Gas fired generation made up 25% of the mix, going up by 3% and coal and nuclear generation saw little change.

Market close data has revealed that the 1-year forward price for both commercial gas & commercial electricity fell slightly - closing at 67.23ppt and £51.58/MWh, respectively. This can be seen in the graph below. 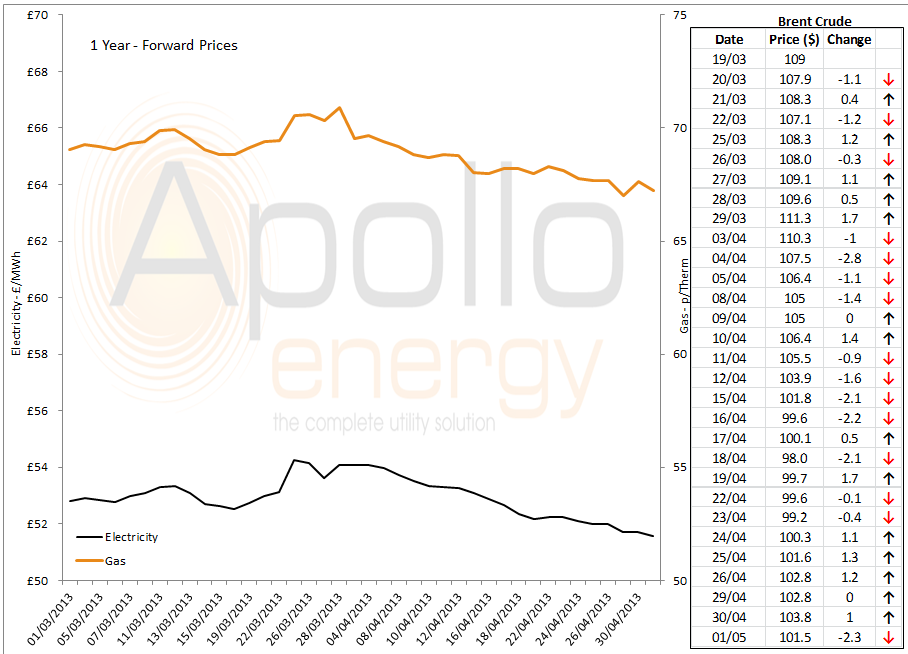 Brent prices peaked at $104/bbl before sharply falling by over $2/bbl to close around £105/bbl.